On Sunday August 7th at 2.30pm The Quaid Quartet/Sextet brought the curtain down on the most successful Gap Arts Festival to date.

Their classical concert captivated the audience of young and old. The packed house gave a standing a standing ovation and called for ‘Encore, Encore!’

Some said the best wine was saved till last. But it was a great weekend and there were many highlights.

Growing year on year, more than 1400 people from far and near attended the sixth Gap Arts Festival as audience and participants. Many had never been to the Gap before. Twenty-five artists and ten technicians were employed.

There isn’t a village, there isn’t a crossroads there isn’t a theatre. But every year at Ballythomas, in the hills halfway between Gorey and Tinahely, we bring in professional crews and equipment and build one. And we use the spaces that the landscape provides.

Six hundred people stood in the school field in the dark of Saturday night and were mesmerised by the Inferno Fire Show. There were full houses and standing ovations for Sorcha Fox and Donal O’Kelly in the main theatre offering The Cambria.  And capacity audiences for the Gap Children’s Cinema.

There was bopping to DJ T’s funk and ska, and to The Atlantic Rhythm Section’s R n B. A hundred youngsters got stuck into the Drop-In Workshop painting and making pottery. The pottery work will be now fired and the children will have their pieces to bring home.

The participants in the two-month Mobile Device Film Making Project produced ten short films that were premiered at the Festival. And who knows what films will be made in the future with these skills learned in the community?
See https://www.youtube.com/playlist?list=PLFlC_haUjy0QttUbosNIf8FEtGt2093UX

The Festival hosted the official unveiling of the ICA Community Tapestry – a wonderful work of women weavers depicting the hills and landmarks of the area. It was then exhibited in Kilanerin Hall, and will have a permanent home in the new Community Centre.

Late on Saturday night local artist Ali Ali thrilled children and adults when he arrived in the field in a Flying Saucer.

And on a sunny Sunday morning Dara McGee from Fíbín led groups of children (and their parents) in painting a mural on the wall of Ballythomas School. There were cups of tea and trays of popcorn. There was chat and laughter. Fields and sheep, flowers, stone walls, a fox and crows appeared. It was fun, it was playful, it was art. And it was on our doorstep.

So if you come by the Wicklow Gap at Ballythomas stop and take a look – it’s the Gap Arts Festival’s thank you to the school and the pupils, to all who helped, to our sponsors, and to all who came.

Go dtí an am seo arís! Till the next time… 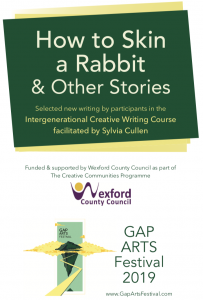 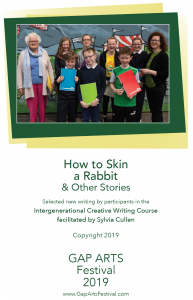